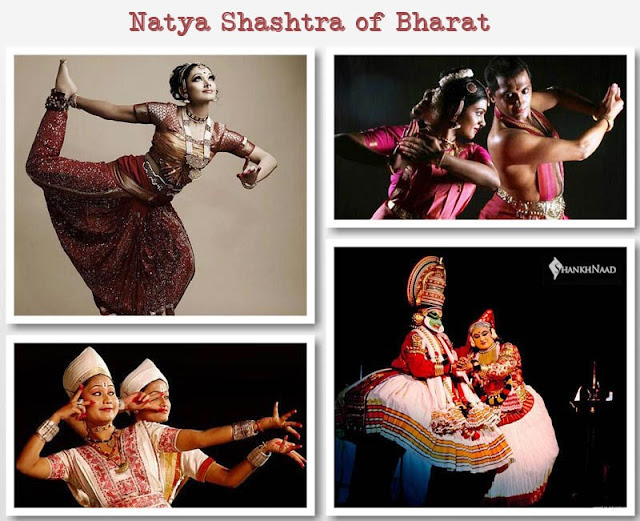 India has thousands of year old tradition of fine arts and classical and folk music and dances. Some of the world-famous dance forms that originated and evolved in India are Bharatnatyam, Kathak, Kathakali, Kuchipudi, Manipuri, Mohiniattam and Odissi. All these dance forms use basically the same 'mudras' or signs of hand as a common language of expression and were originally performed in the temples to entertain various Gods and Goddesses. They were also effective in carrying forward the various mythological stories from generation to generation while entertaining the audiences. It eventually became a part of 'Natya Shashtra', as propounded by Sage Bharata to compile and forge some rules and regulations of entertaining arts.

Lord Shiva is said to be the 'Nataraja' meaning 'King of All Dances', who is said to perform the Cosmic Dance that delicately balances life and death and all that is happening in the Universe in harmonious cycles.

Kathak
Kathak is one of the most important classical dances of India. Kathak is said to be derived from the word katha, meaning "the art of storytelling." The Kathak dance form originated in north India and was very similar to the Bharatnatyam dance form. In ancient India, there were Kathakars or bards who used to recite religious and mythological tales to the accompaniment music, mime and dance.

Kathakali
Kathakali is the classical dance form of Kerala. The word Kathakali literally means "Story-Play". Kathakali is known for its heavy, elaborate makeup and costumes. In fact, the colorful and fascinating costumes of Kathakali have become the most recognized icon of Kerala. Kathakali is considered as one of the most magnificent theatres of imagination and creativity. Kathakali dance presents themes derived from the Ramayana, the Mahabharata and other Hindu epics, mythologies and legends.

Kuchipudi
Kuchipudi is one of the classical dance forms of the South India. Kuchipudi derives its name from the Kuchipudi village of Andhra Pradesh. In the seventeenth century the Kuchipudi village was presented to the Brahmins, who were experts in staging dance and drama. Kuchipudi exhibits scenes from the Hindu Epics, legends and mythological tales through a combination of music, dance and acting. Like other classical dances, Kuchipudi also comprises pure dance, mime and histrionics but it is the use of speech that distinguishes Kuchipudi's presentation as dance drama.

Odissi
Odissi is one of the famous classical Indian dances from Orissa state. The history of Odissi dance is almost two thousand years old. Odissi is a highly inspired, passionate, ecstatic and sensuous form of dance. Like most of the South Indian classical dances of India Odissi too had its origin in the Devadasi tradition. The state of Orissa has a great cultural history.
Posted by Samarpit's Blog at 1:19 PM